Where Does the Trash Go in Washington, D.C.? You may not stop to think about your trash after it makes its way to the trash can, but what exactly happens next?

In 2017, the District of Washington reported that the Department of Public Works (DPW) collected nearly 800,000 tons of solid waste per year- but surprisingly, that doesn’t account for all of the cities trash!

Waste Management in the District

Waste reduction programs like the Department of Parks and Recreation and the Department of Energy and Environment employ collection teams for public spaces in the hopes to develop a zero-waste plan that attends to divert 80% of the districts solid waste to reuse, recycle, compost, or anaerobically digest.

How does the city plan to achieve this goal? By educated its residents! Let’s take a look at Washington D.C.’s waste measurements to understand what your trash looks like and where it is likely headed.

According to the 2015-2016 Solid Waste Diversion Progress Report, the fate of Washington D.C. waste is grouped into 4 categories: 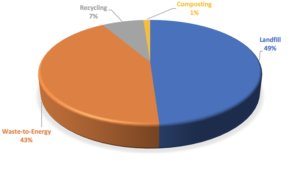 Generally, once the DPW or private collections takes your trash, it is transferred two one of three stations:

Ft. Totten Transfer Station houses roughly two-thirds of the district’s waste and offers a drop-off program that is open to residents to dispose of e-waste and hazardous household items.

Covanta Fairfax Waste-to-Energy is a final disposal site outside of the city in Fairfax, VA . Covanta is considered one of the largest waste facilities in the country and processes more than 3,000 tons of municipal solid waste per day for Washington, D.C. suburbs.

The city continues to try to decrease the amount of landfill and disposal facilities waste with its 80% zero waste initiative; however, the program still has a long way to go. Learn more about the district’s sustainability plans.

You may also be interested to check out our other post, about what happens to garbage in the Philadelphia region.